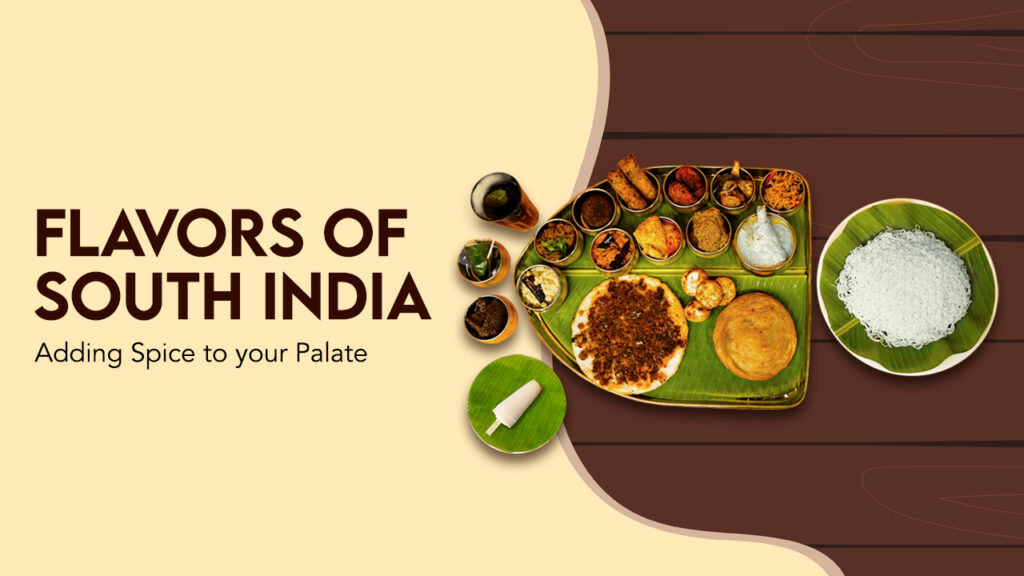 The Southern region’s culinary preferences are significantly influenced by its terrain as well as its cultural influences. There are notable regional variations in both their usual vegetarian and non-vegetarian meals.

South India’s coastline states are all hot and humid all year round. Since there is a plentiful supply of rain, there is no shortage of fresh produce, veggies, or grains. South Indian breakfast dishes are not only delectable but also among the healthiest meals you can eat while visiting India. On the other hand, Tamil Nadu’s Chettinad cuisine may be the spicier of all Indian cuisines. Malabari cuisine from Kerala has a variety of delectable seafood dishes, whilst the Nizams (rulers of Hyderabad) serve royal Nizami cuisine that is heavily flavoured with pricey, exotic spices like saffron.

Tamil Nadu’s many areas each have their own unique specialties. Some of the delectable non-vegetarian foods composed of chicken, meat, and fish are famous in places like Madurai and Tirunelveli.
Parotta, a flatbread made of flour is a delicacy that is best had with a spicy chicken or meat curry. The area is also known for its Muttaparotta and Karidosa. The Kanyakumari district is well-known for its fish preparations in several sections. Fish is plentiful since it is surrounded by the Indian Ocean, Bay of Bengal, and Arabian Sea.

The spicy curries and liberal use of poultry in Chettinad cuisine have made it popular across India. The Nattukottai Chettiars or Nagarathars live in Tamil Nadu’s Chettinad area.
According to legend, the Chettiars were originally from Tamil Nadu’s coastal region, but a significant flood forced them to relocate to the area that is now arid and desolate.

The cuisine offers a broad range of vegetarian options in addition to its fiery, non-vegetarian meals. The Chettiars were vegetarians at first, but because the majority of them were traders and merchants, they carried with them customs and traditions from other countries, which over time showed in their cuisine.
Vegetarian favorites like, Paniyaram: Vellai Paniyaram, Paal Paniyaram, Kuzhi Paniyaram, and other items such as Idiappam, Uttappam, Kandharappam and Mango Pachadi, originate from Chettinad cuisine.

Eating on a banana leaf for significant rituals and events is still a revered custom, despite all the changes in dietary practices and eating habits. On exceptional occasions, a complete course known as Virundhu Sappadu is served on the banana leaf.
Every auspicious meal starts with a dessert, is followed by rice, various curries, and is finished with a dish made with curd. All that is required to sample the many flavours of Tamil Nadu cuisine is this one meal.

Delicious seafood that is both adaptable and flavorful is a staple of Keralan cuisine. Karimeen, or pearl-spotted fish, is one of these seafood items. Fish that has been marinated is fried on a low temperature until the fish pieces are properly done and crispy to make Kerala’s Karimeen Fry.

Aatu kaal paya, a dish made out of the fat and flesh of goat legs have been a delicacy passed down from the Middle East and now into the modern times to the coastal Mappila population of Kerala, who adored mutton and was particularly fond of paya, is what gave paya its recent surge in popularity. In fact, they are responsible for the creation and popularity of the contemporary Aatu kaal paya.
The characteristics of the paya include a thick stew with the inclusion of coconut, cashews, and poppy seeds. It makes sense why it was the focal point of every wedding back then. In the end, it did highlight the finest that the shore has to offer.

Then comes the adored parotta, the street food vendors in Tamil Nadu cook up some of the most mouthwatering parottas, and they can be found anywhere from Madurai to Chennai. They’re a favourite supper or evening snack. And once again a staple serve in wedding feasts all over the state and city.

Southern cuisine is no longer confined to the state, instead parts of it is now quintessential all over eating practices pan-India.

The Wedding Biryani has taken such standalones from cuisines across the coast, specifically following the traditional feast held to welcome newly-wedded grooms into the family.

Biryani Treat To
Brighten Your Day!

Explore an array of treats to burst your cravings!

A Unit Of By Naz Food Concepts LLP. All rights reserved.