Types of Biryani in India – TheWeddingBiryani 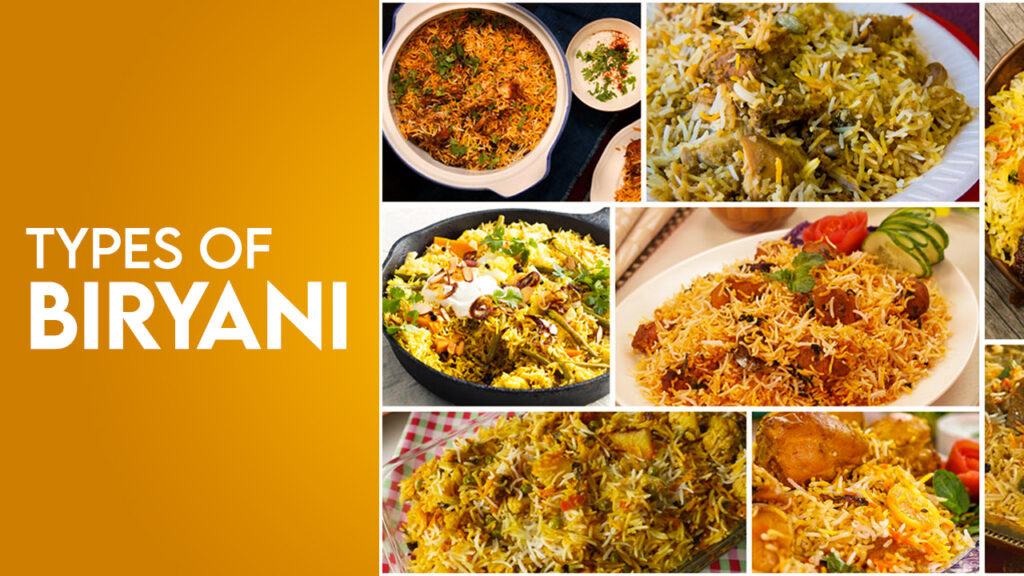 India is renowned for its extensive and varied culinary traditions, but one of its most well-known dishes is THE BIRYANI. There are around 26 different varieties of biryani in India, with variations found in almost every area.

Although its precise ancestry is unknown, it is believed that the Mughals and Arab traders brought biryani to India. But what we do know is that this mouthwatering concoction of fragrant rice, spices, and meat has endured the test of time.

Given that each state has a unique variation of the meal and a distinct history, biryani may easily qualify as a national food. Here are a handful of this illustrious dish’s signature styles.

The Mughal emperor Aurangzeb’s invasion force brought biryani to Hyderabad in the late 1600s, and the Nizam’s cooks created 47 new types for the king to eat. Tahiri biryani is the name of the vegetarian variation.
There are two varieties of Hyderabadi Biryani: Pakki and Kacchi, both of which are thought to have originated in the Nizam of Hyderabad’s kitchen. Basmati rice and meat are cooked separately and then layered in the Pakki Hyderabadi Biryani.
While the Kacchi Hyderabadi Biryani is made with layers of raw marinated meat (chicken or lamb) sandwiched between layers of basmati rice flavored with saffron, onions, and dried fruits, both are cooked slowly over charcoal in an earthen pot with dough sealing the lid. The result is a rich and fragrant biryani.

This coastal Malabar dish calls for a lot of ghee and small-grain Khyma or Jeerakasala rice in place of Basmati. Instead of the regular chicken or mutton, fish or prawn are frequently used. The primary components are all cooked separately and then combined. Along with regional spices, onion, ginger, garlic paste, lime juice, curd, coriander, and mint leaves are utilized. Low in chili content, with cashew nuts and sultana raisins as garnishes, this variant is best suited for those with a mild tongue.

This meal is very popular in the northern region of Tamil Nadu, which has a large Muslim community. Dried chili paste and whole spices are the distinguishing characteristics of this biryani, which is also referred to as Vaniyambadi Biryani since it is a staple of the cuisines of the two nearby cities of Ambur and Vaniyambadi in the Vellore region. This dum-style dish, which uses coconut milk and contains curd and mint leaves, wouldn’t be complete without a sour eggplant curry and raita.

The Lucknowi Biryani, sometimes referred to as the “Awadhi biryani,” is distinctive due to its dum pukht cooking method. Saffron, star anise, and cinnamon are used to flavor the rice, which is partially cooked separately from the spice-infused beef (or chicken). Then, the meat and rice are piled and stewed for hours in a handi (deep-bottomed dish) to bring out the flavors. The finished dish is a tender, mild Lucknowi biryani.

It originates from South Karnataka and is among the mildest biryanis available. Additionally, a hotter variation of it is seen in areas close to Mangalore. The ghee and spice mixture that are combined with the rice and then left to rest overnight give the dish its standout flavour. This enables the flavours to permeate. Apart from the usual chicken and mutton, beef and prawns are the most popular meat options.

With that said, The Wedding Biryani stands as an up-and-coming competitor that brings authentic Tamil Muslim-Wedding styled biryani to the fore and brand itself amongst the most favored tastes

Biryani Treat To
Brighten Your Day!

Explore an array of treats to burst your cravings!

A Unit Of By Naz Food Concepts LLP. All rights reserved.